With BiyaheFinder Tacloban Travel Information, you’ll have everything you need to make the most of your trip. This brief Travel Info contains all the information you need to know about amazing Tacloban, Leyte, from flight availability and promos, to where to stay and what attractions you can’t miss. So if you’re looking for information for your trip to Tacloban, look no further than Tacloban Travel Guide by BiyaheFinder!

The flight schedule shown above was updated on November 1, 2022, for the Month of November 2022. Airlines frequently change their schedule without notice, so it is best always to check out the airlines’ official websites.

Blank cells mean there are no flights for that particular route to and from Tacloban.

Check out the latest promos to and from Tacloban, Leyte. Blank cells mean the particular airline does not have any promos going to or coming from Tacloban.

To and From Tacloban Ferry Services

There are no passenger ferries to or from Tacloban, but there are buses and vans that will take you to Ormoc, Baybay, or Naval ports before transferring you to Cebu City.

Tacloban’s most popular month for tourism is April, followed by February and March. The cost of hotels and flights will be at its highest during these months, but you may save money if you book ahead of time. In October, it is unlikely that tourists will visit Tacloban. Visitors who are prepared to visit then will almost certainly discover it to be the least expensive month.

Check out the best hotels in Tacloban as guest-rated on Agoda.com. The best Tacloban Travel hotels rated on the platform are categorized according to value or budget (one to two stars) and mid-high end (three to five stars) hotels. Click on the link to check out the hotel photos, amenities, nightly rate, and room availability.

To and From Tacloban Land Transport Services

The Santo Niño Shrine and Heritage Museum is one of the 20 presidential rest houses constructed by late former President Ferdinand Marcos for his wife Imelda, who was from Tacloban. The exquisite building served as a chapel, museum, and guest house with 21 rooms.

In 1979, a religious monument was erected in honor of Sto. Niño, Tacloban City’s patron saint and subsequently taken over by the Presidential Commission on Good Government in 1986. It is said, though, that Imelda only stayed in the home once. It is now well-known among tourists owing to its connection with the Marcos family.

The San Juanico Bridge is part of the Pan-Philippine Highway and connects Samar to Leyte in the Philippines. Its longest length is a steel girder viaduct over reinforced concrete piers, and its main span is an arch-shaped truss design. It was built under the Marcos administration and has a length of 2.16 kilometers —the Philippines’ second-longest bridge spanning a body of sea water.

The Tacloban Bridge is one of the Philippines’ most-visited attractions, according to the national government. The San Juanico Bridge is a key link between Samar and Leyte Islands, connecting them economically and tourism-wise.

The Price Mansion is an example of a nineteenth-century American colonial home constructed in the Philippines. It was General Douglas MacArthur’s official home and headquarters during the Liberation of the Philippines era in 1944. The structure previously served as the residence of Walter Scott Price, his wife Simeona Kalingag, and their children. It has now been renamed as the CAP Building, which is located on Romualdez Street near Supreme Court.

The Leyte Provincial Capitol, which was erected in 1907, is a neoclassical structure. The “Kapitolyo,” the seat of the provincial government of Leyte, is located at the junction of Sen. Enage Street and Magsaysay Boulevard. The Philippine Commonwealth Government’s legislative chamber was also here during President Sergio Osmeña’s arrival with WWII Liberation Forces in 1944. In 2013, Typhoon Haiyan damaged the Capitol. 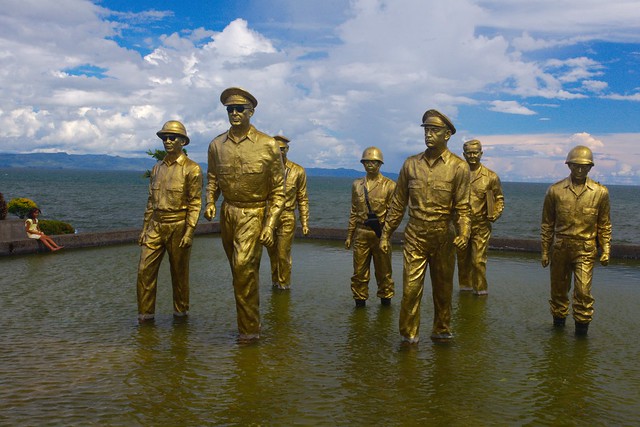 The park’s most distinguishing feature is the enormous bronze statues, which are twice the size of a regular person. There are seven bronze sculptures depicting the people who led the historic walk onto the beach that day. Two of the persons depicted by the statues are General Douglas MacArthur and then Philippine president in exile, Sergio Osmena.

The war memorial is located in the municipality of Palo on Leyte island in Eastern Visayas and is one of the region’s major tourist attractions. 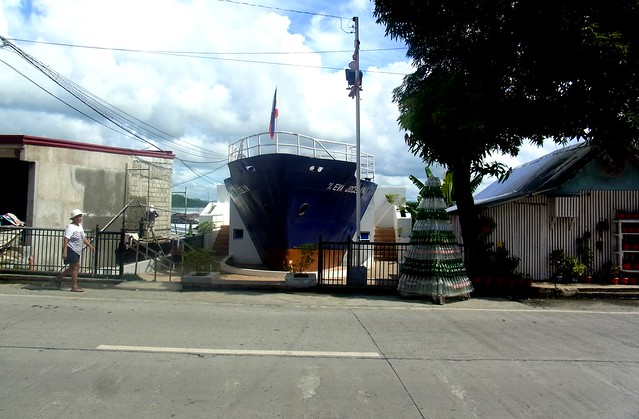 The name “M/V Eva Jocelyn” refers to a ship that was wrecked in the coastal barangay of Anibong during Yolanda and wiped out numerous homes, killing many individuals. The monument is dedicated to storm victims.

“On November 8, 2013 at 7 a.m. M/V Eva Jocelyn, which was anchored in the city harbor, ran aground and killed residents of Barangay Anibong. It was pushed by a 7-meter high storm surge caused by winds in excess of 370km/h brought by Super Typhoon Yolanda,” read the marker on the memorial.

It never left its spot, as the city government turned the bow of the ship into a tourist attraction.

The Korean Veteran Memorial Park is located near McArthur park, at the junction. The Koreans were given the land for their involvement in Yolanda and subsequently erected a memorial in honor of Filipinos who assisted them during the Korean War. The park is architecturally beautiful with some fascinating exhibits and statues. It’s worth seeing.

The Paruparong Bukid Nature Conservation Center is a great place to go if you’re looking for a quieter and more colorful butterfly experience in Leyte. It’s where nature lovers and people of all ages get caught up in the wonders of insects and other wildlife. The conservation center is located in Barangay Lukay, Babatngon, Leyte, about 30 minutes or 30 kilometers from Tacloban City.

The Madonna of Japan is a monument that symbolizes the close friendship between the Japanese and Filipinos. It can be found on Kanhuraw Hill, facing Kankabato Bay, near City Hall. During World War II, it became a campground for Japanese soldiers.

The Santo Niño Parish in Tacloban City is a notable historical structure in the city. The image, it is claimed, halted an epidemic in the area in the 19th century and has since been housed at this church. It was handed over to the Archdiocese of Palo in 1990. During the recent coronavirus pandemic, it has been designated as an archdiocesan shrine.